It is, sadly, an inescapable conclusion that my first true love in Legion is on its way out the door.

Goodbye, expensive AT-ST. Hello, reasonably priced TX-225 GAVw Occupier Combat Assault Tank with drop top and Sirius included. It’s even got a cocktail bar in the dash, all for less than the base cost of that other heavy unit.

I knew that AT-STs hadn’t done anything particularly noteworthy in any major tournament since…ever, perhaps? And certainly not at anything recent.

Despite this knowledge, I set out to give the old Chicken a last hurrah in the third season of the Invader League, a final attempt to make something reasonably competitive out of a unit most everyone else has given up on. (If triple saboteurs can be a thing, maybe, just maybe I could make the AT-ST a thing.)

Here is the list I ran with to begin:

I knew, of course, that I was already stubbornly running something particularly off-meta. Let me count the ways:

And then I got paired into perhaps the second most stacked group in Invader League (after Group 10, I think), and was not feeling particularly good about my odds.

So in a vain attempt to make the transition from primary hobbyist to a halfway decent competitive player, I began my Invader League run with the faintest glimmer of hope and got out my notepad.

And now, without further ado, a review of how I went 0-5 in Invader League:

It came to my hilarious and immediate surprise that after silently lamenting the inevitable death of the AT-ST, my first opponent also decided to bring one.

His list was similar, though our AT-ST pilots differed and he choose to bring three snipers, bringing him to 10 total activations to my 9. 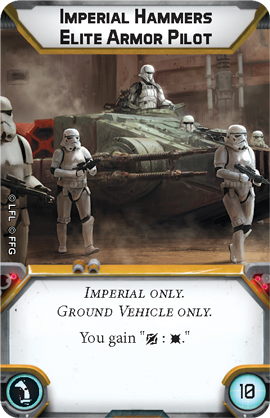 My plan was to feint him a bit – we predictably placed our moisture vaporators close to our deployment zones, and so I hoped to quickly pop my two up to 4 wounds, then run a sort of option play to the right side of the map (with my AT-ST, curiously positioned off to the side) and take his third objective by surprise before he had time to respond.

Unfortunately, I made two main mistakes: first, I over-committed one of my precious DLT units to put a bit of pressure on the fourth vaporator. When my Snowtrooper unit on my first objective failed to survive long enough to get it to four wounds, the back-up DLTs were too far away to be of service, and did essentially nothing during the match.

Second, I positioned my E-Web horribly. It took four wounds and died without firing a single shot. If I’m going to play a 9-Activation list, I’ve got to make the most out of every single one of them.

My dice certainly decided not to help, but I refuse to blame a loss on dice. Poor positioning doomed me.

My AT-ST, for what it’s worth, performed extremely admirably. It outright killed three units and left only one alive in a fourth, more than earning its points back. The surge pilot is a monster. And as Copes marched his First Sergeant Arbmab walker up the middle and wiped out two of my units, I could see that there were definitely some potent new options for my beloved heavy.

Still, things were off to a rocky start.

Having been suitably chastened in a close game (and then chastened again in a practice match with Nerfley, who gave me some good advice), I changed my list up just a bit. I dropped HQ Uplink and added on the AT-ST’s Mortar. I didn’t want my AT-ST dying, but with 200+ points potentially going to waste I had to give it something to do. For now, threatening snipers and long-range activations was good enough. 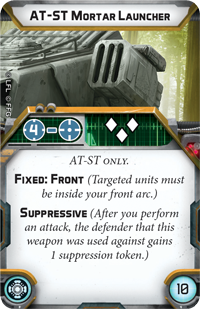 Beez was running a pretty neat Krennic/Bossk list with two Death Troopers, two Snipers, and a bunch of Corps. He had the edge on me by one activation to start, and a narrowly range 4 shot by Bossk into heavy cover wiped out an entire Stormtrooper unit turn 1, so I was down even further.

My plan was to plant my AT-ST near the middle after a couple of turns and swing my troops around to the side with the only lane-blocking, heavy cover I could. Unfortunately, my Snowtroopers got caught in a very awkward spot and Beez effectively cordoned off, so each unit only got off two range 3 shots the whole game.

Ultimately, my plan would have worked if I wasn’t so far down on activations. I was just shy of tying up the middle point at the end after my DLTs and a Veers bombardment knocked out or suppressed some key players on the other side.

The AT-ST certainly earned its points, decimating three squads that I later picked off with DLT shots, and died valiantly on Turn 4.

What I was realizing, though, was that my self-imposed limitations were, indeed, truly limiting. The AT-ST was killing plenty but taking up too many points. The E-Web was feckless a second time, and desperately wanted to be two Snipers locking down lanes.

I was starting to feel frustrated, but I wasn’t going to give up on the AT-ST dream.

My next opponent was a player in the High Command Invitational at Adepticon, so I knew I was in for a tough match to say the least.

And, indeed, this game was over by the end of turn four.

All the usual excuses apply: I had had a long day at work, still needed to pack for Celebration the next day, and my dice absolutely betrayed me. I rolled something like 15 rally dice and cleared only one suppression, on multiple occasions I double-blanked on at least one red die with an aim, and my AT-ST just couldn’t make a block.

(To start the game, he wisely Max Firepower’d my AT-ST. It resulted in 4 crits after surges and impact 2, and I rolled zero saves on surge white dice. Not great!) 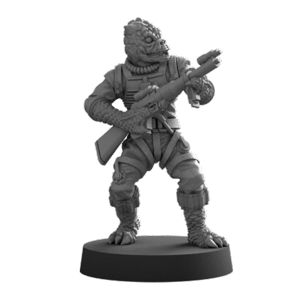 Sploosh, though, played a wildly competent and aggressive 11-activation double bounty list that had me on my heels early. Turn 1 looked fine for me, and since I was down two activations to begin I let him have the middle objective for turn 2 and tried my best to set up for the long haul. But things fell apart quickly.

In the previous two games, I had sent my AT-ST and my Corps in different directions. This time, I wanted to secure the objective closest to me than march through the middle of the map with my AT-ST slowly but surely leading the charge.

Thanks to Battle Lines putting everyone so close to start, though, he was able to nuke my AT-ST before it activated in turn 3 with Bossk’s Lying in Wait (I had the clever I idea to bait him with this juicy target, then reverse well out of range given his position behind heavy cover, but then I rolled the Disabled token at the damage threshold and had to hope for the best). As it turns out, 6 aims and surge to crit at range 4 means bad news for armored vehicles.

Once the AT-ST was out, my plan fell apart and I attempted to regroup, but failed miserably. I conceded at the end of turn 4 since he was up something like 5 activations and I still had work to do that night.

This was, admittedly, the lowest point of Invader League for me.

In a lot of important, I had played smarter than my first two matches. I largely nullified the extremely generous sniper lanes on Starkiller Base with careful positioning, I placed my E-Web well and made it an actual threat for the first time, and I was being more careful with my corps units.

But none of that mattered.

Sploosh played very well and made me pay for my mistakes, which is exactly what good players do.

So I packed my suitcase and headed to Celebration a little low in spirit, and with two games (including one world-invitee) left to go.