You’re sitting under the light of your handy miniature-painting lamp, getting ready to base Emperor Palpatine, or the Royal Guard, or even the medical droid, and you think to yourself…

Wouldn’t this look better on the Death Star than on some dusty battlefield?

If you’ve ever thought this way, I’ve got just the tutorial for you.

Thanks to the many people on Facebook who specifically asked for this tutorial. It took a bit of creativity to come up with something I was happy with, but I think you’ll all enjoy it very much.

Before we get started, it is of course worthwhile to note that you need not necessarily create your own Death Star bases.

FFG already sells Premium Bases for all sizes of bases, and they look quite nice. With a bit of black paint and some gloss they’ll look perfectly industrial and well suited for your needs. In fact, I genuinely wish these had been out when Legion first released – I would have purchased plenty on my own! 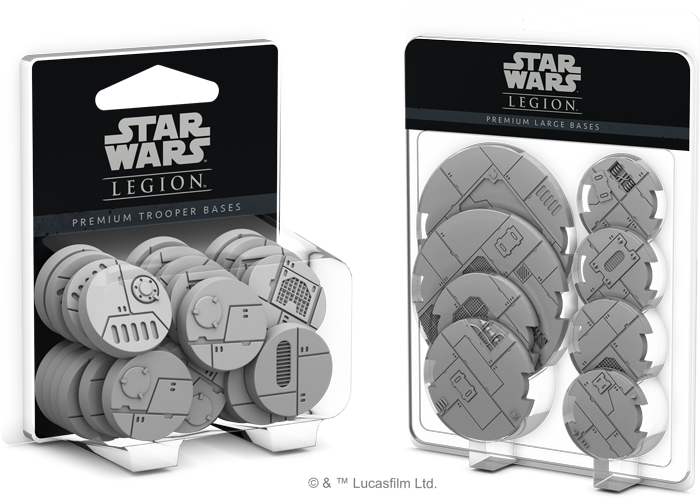 Prime black and spray a gloss coat, and baby you’ve got stew going.

But maybe you’re looking for something a little different, or are just a bigger fan of DIY projects.

If that’s the case, we’re going to take a stab at something a little more emblematic of the Death Star and the Empire specifically. Let’s see what we can do.

You May Prime When Ready

It’s hard to precisely mimic a bland industrial grey interior – who really wants to just have freshly polished floors for a miniature base? That’s no fun – but we can invoke one of the most iconic design choices from the Original Trilogy through a bit of clever craftsmanship. 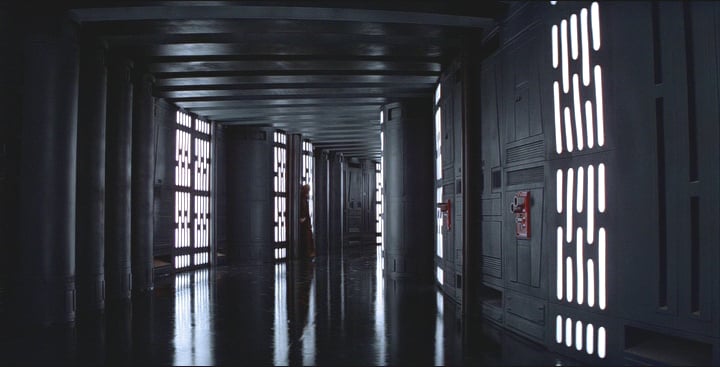 The Death Star interior designer was a genius, as far as I care.

Let’s use that general motif to imply the Death Star. We can paint it onto just one or two bases in our unit (perhaps just on unit leaders?), and then use glossy black for the rest. But how are we going to do that, you ask?

And now, the execution.

1) Prime the Base Black

Prime the whole dang thing black (I use Games Workshop’s Chaos Black, but use whatever you’re comfortable with).

2) Cut Out the Template with an X-Acto Knife

This might be a bit tricky on the smaller corps bases, especially if you don’t have much experience working with hobby knives. So I included multiple just to practice with. Make sure to do this on a surface that can afford to be cut up!

Get as close as you can, but remember that it doesn’t have to be perfect – we can always touch the paint up later.

3) Affix the Template to the Base, and Spray White

Making sure to cover any errant edges or exposed areas, tape the template down and give the whole thing a quick but thorough spray of white.

Remove the template and let it dry.

Once it’s dry, use a very fine brush to clean up any fuzzy line-work with black and white paint.

Because of the final difference between the gloss surface and the matte surface, the black top and sides should look sufficiently distinct. But if you’d like to mix it up a bit, paint the sides something like German Grey for a more varied look.

Whichever you choose, give the whole thing a healthy spray with the matte varnish and let dry.

5) Cover the Sides with Tape, then Gloss Varnish the Top

In order to get that glossy Death Star look, we’ll now cover up the sides with some painters tape, and give it a spritz with the gloss varnish.

You could, of course, use an eye-dropper varnish instead (I often use Vallejo’s for trooper helmets, boots, and gloves). Whichever works for you.

And voila! A freshly-waxed, Death Star-inspired base, as promised.

Whether you’re plotting the destruction of Alderaan or just going for a quick test lap around Scarif, I hope that you enjoy this tutorial.

As always, if you follow through on this I’d love to see the results! Post your photos in the comments, tag me on Discord or Facebook, or send them via email.