In a few short weeks, the criminally underrated Solo will be appearing on Blu-ray. To celebrate, I wanted to come up with a few ideas to get started on terrain for one of my favorite locales from the movie: the Corellian Shipyards that Solo and Qi’ra called home at the beginning of the story.

Corellia (known for more than just its Corvettes and Wedges) is actually a beautiful planet with a variety of biomes, but we’re going to focus today on the grungy, grimy shipyard aesthetic that we got a taste of in the film. This week, we’ll look at making some simple pipe barricades and a few flashy signs for tucked away shops.

And, as always, we’re going to do it for just a few bucks and at a level any beginner will be comfortable with.

Got a few straws on you?

Let’s start with the really easy one: industrial piping.

The main ingredient for these bad boys is smoothie straws. I bought them in bulk off of Amazon for dirt cheap, but you can also grab a few from your local 7-11, Jamba Juice, Smoothie King, etc. etc. Cut them in half or in thirds (your choice), and glue them together in a nice, neat stack like so. 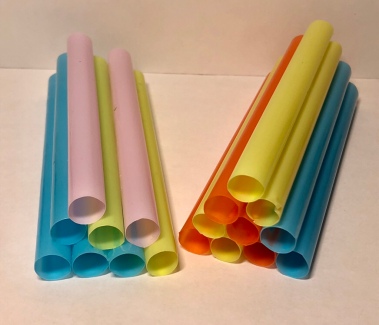 I found that using PVA craft glue (like we’ve used for flocking) worked best, and that super glue really didn’t do the job for…reasons. I’m not totally sure. But that sweet PVA craft stuff will do the trick just fine, and it’s way cheaper.

Next, we prime. I also had trouble with my Tamiya Fine primer, but Citadel’s Chaos Black primer worked like a charm. Make sure to get a little bit on the inside of the ends of the straws so that the bright colors don’t peek out.

Finally, we’ll paint our metallic colors. For the majority of my pipes I ditched my usual favorite Leadbelcher and switched to a generic metallic grey I purchased for about $2 USD. We don’t need fine detail and will be using a lot of it, so now’s a great time for that cheap acrylic craft paint.

To add some variation, I mixed a bit of Vallejo Flat Orange with my Citadel Runelord Brass (from the Palpatine statue article) to create a coppery look and painted it onto just one of the exposed pipes.

A bit of optional Nuln Oil wash and some light, smeared sponge application of Citadel Typhus Corrosion for rust (although any old brown would do, too) adds great depth and detail as well.

Below is the finished product, with a couple Stormtroopers for scale. A really pretty, thematic, dirt cheap alternative to the usual FFG barricades!

Now we’re going to switch to something a bit less practical and a bit more visual.

I really liked the idea of creating something like the statue that had a strong vertical element, but that was less straightforward in its implementation. Enter the LOS-blocking and vehicle-disrupting industrial district signs. 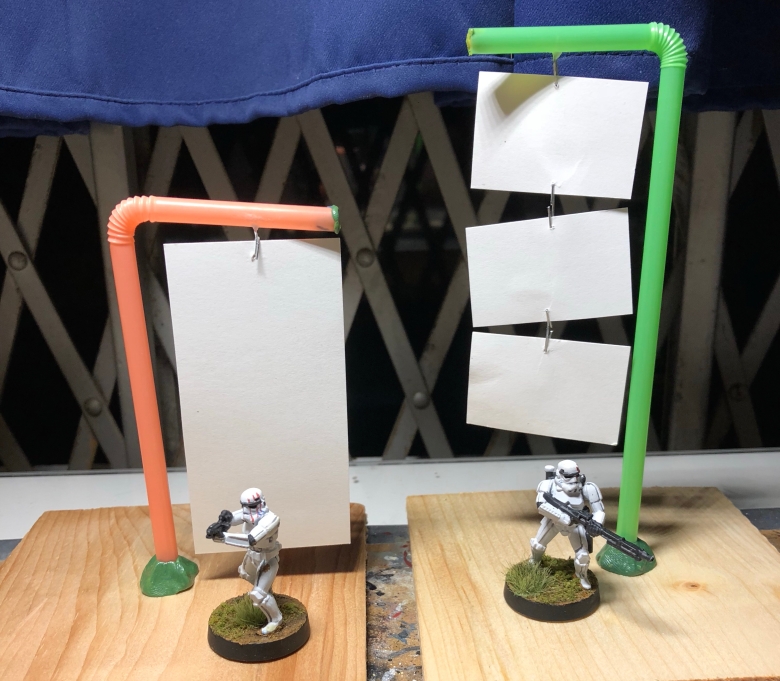 We only need a few things to make these signs a reality:

All I did was affix the straws to the bases with a small mound of GreenStuff, then used staples to connect the business cards to the straw overhangs. Then, I primed everything black and started by painting the straws with the same metallic paint as the barricades. I used a dark brown for the GreenStuff base. Just as with the barricades, I finished that part off with some Nuln Oil and Typhus Corrosion.

For the signs, I used this handy Aurebesh translator to plan things out. I wanted a chalk-like effect, so I did a few layers of very thin paint with a stronger, lighter color (pretty close to white) in the center.

As a final touch, I used some of the same Typhus Corrosion to give the clean signs a more grimy, worn down feel:

Obviously the bases I used are prohibitively big. You can use something much smaller to create some really simple line-of-sight blocking fixtures that are easily movable around your battlefield.

I really love these two projects. Minus the paint and GreenStuff I already owned, I got everything I needed for these fixtures for less than $5, and have plenty to make more if I want (straws especially). Turning household products into viable Legion terrain is one of my new favorite things to try.

I hope you found this tutorial useful and fun, and as always if you make your own versions of these leave the picture in the comments! I’d be happy to see them.