Blocking is the tactic of placing an obstacle, objective, or unit in your opponents path to prevent them from reaching a specific point – blocking is a key tactic if you use melee units or you are up against an opponent who has melee units. Knowing how to use blocking or how to get around it can often be the difference between slaughtering the opponent with your lightsaber or being caught out in the open staring down the enemies gun line.

The premise is pretty easy, but the actual execution requires an abundance of foresight and precision. The core of blocking is to stop an opponent from getting into melee by denying them a path or a landing zone. Now let’s break down how it works in detail.

Cohesion: When placing a mini in cohesion, it cannot be placed in base contact with enemy minis, unless the unit is in melee.

Melee: If a unit has a melee weapon, it can start a melee by moving into base contact with an enemy miniature. You cannot move a unit such that it would be in base contact with multiple enemy units–effectively starting a melee.

Given the above rules we see that there are situations we can create that deny opponents the path or the landing zone to enter into melee with our unit. The interaction between the Melee and Cohesion clauses mean that the unit leader must be the one to move into base to base contact to establish melee, and not any other mini in the unit, and this is the core of blocking. The Movement and Token clauses provide us with ways to deny movement paths and landing zoned for that unit leader through the clever and precise use of terrain, tokens, and other minis. Let’s take a look at examples below.

Terrain Blocking: This is probably the most common version of blocking because it involves no additional models and most pieces of terrain will do the trick. Because most units cannot move through impassable terrain, or are slowed down by difficult terrain, and can only make a pivot of up to 90 degrees in the center joint on the movement tool (and not freely along the path) we can place a unit so that terrain between the threatening unit and the target unit effectively denies the threatening unit a legal path into melee in the first place. There are a couple ways to achieve this… 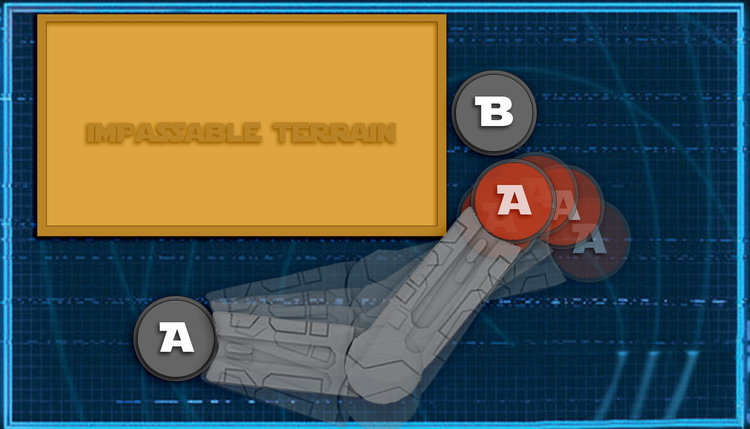 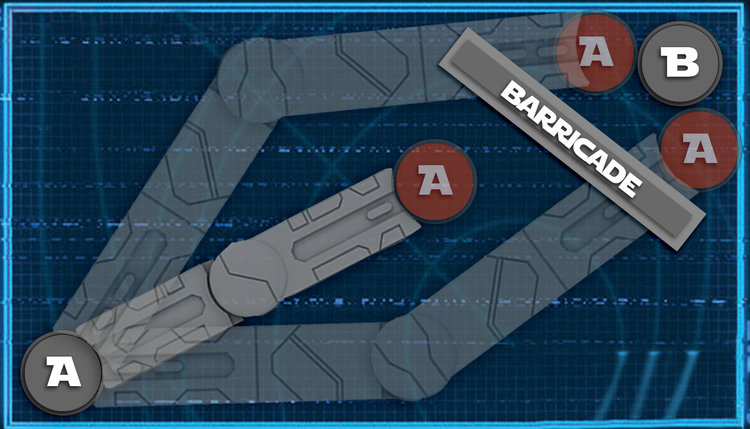 The second example is similar to the first, and it is equally as valid with difficult terrain as it is with barricades or any other effect that slows a unit. In this example model A would clearly normally have the speed to cover the distance to the target, but because moving through difficult terrain reduces the moving models speed by one, the new speed after adjustment is no longer enough to cover the distance to reach the target. Keep in mind that like in the first example, you still have to account for all the possible angles and positions of their full movement to ensure that there isn’t a path created by their full move that would skirt the difficult terrain and still land them in base contact with the target model.

Vehicle Blocking: Vehicle blocking works the same as the impassable terrain example above, but is easier to set up because all elements required are under your control. Because most units cannot move through ground vehicles, we can place a ground vehicle between the threatening unit and the target unit effectively denying them a path into melee in the first place.

There are some additional considerations in vehicle blocking though – mainly that the blocking piece (the vehicle) is moveable and destroyable – so in addition to paying attention to all possible angles, you also have to be aware of effects and circumstances in which the vehicle can be moved out of a blocking position or worse, destroyed. But the blocking unit being mobile isn’t strictly a drawback. The units can also be moved together to create a “moving fortress” and additionally you get two activations to get the blocking positions right or adjust if your opponent catches you off guard, as opposed to just the one chance offered by terrain blocking.

“Elevation” Blocking: This form of blocking can be difficult to set up as you need the right piece of terrain in the right location on the table at the right time – but it is something to keep in mind when you need it. Using the clause under movement “A mini’s base cannot be placed such that any part of it overhangs a ledge” we can create a situation in which there is no valid landing zone for the threatening unit to end their move in melee with the target unit. 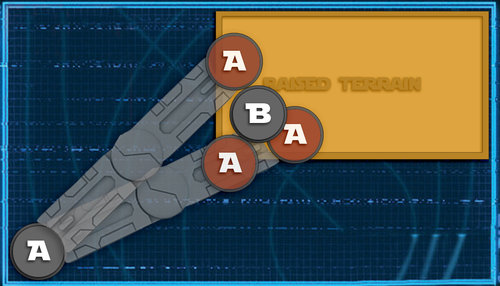 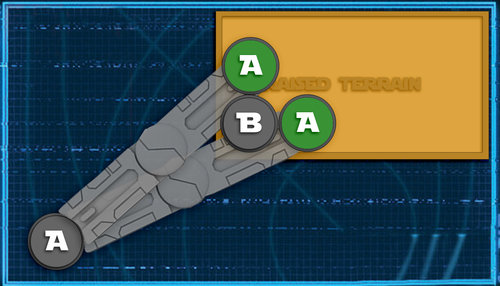 Although I’m calling this “elevation” blocking, it doesn’t always have to be true Elevation as defined in the RRG, it just has to be a piece of terrain with a ledge – in this example let’s say it is terrain that isn’t flush with the table, but isn’t tall enough to slow the unit or require a climb or clamber – a set of stairs or a raised slab would be a great fit in this example. Because models can’t be placed with their base overhanging a ledge you can create a situation where there are no valid landing zones in base to base with your model. Keep in mind though, that because troopers can move through other troopers (friendly or enemy) that if the model has enough movement to move past your model they do have a valid landing zone behind your model as shown in the second example.

Token Blocking: Token blocking is a little easier to set up than terrain blocking because more of the elements are under your control, but is much more limited in usefulness because you will have to be on a mission objective that provides objective tokens as well as the threatening model being able to move through objectives. Using the clause under Objective Tokens “Miniatures can move through but cannot overlap objective tokens,” we can set up scenarios where we can deny the threat model a valid landing zone in melee with the target unit if we can place the objective so that the threatening model would have to stop on top of the objective to end in base to base with the target model. 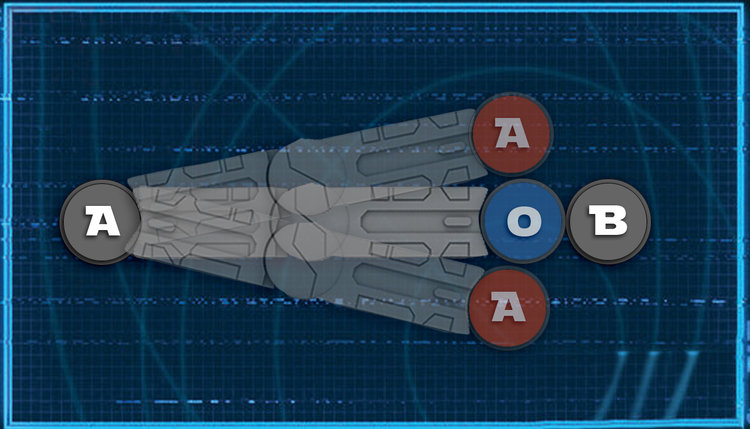 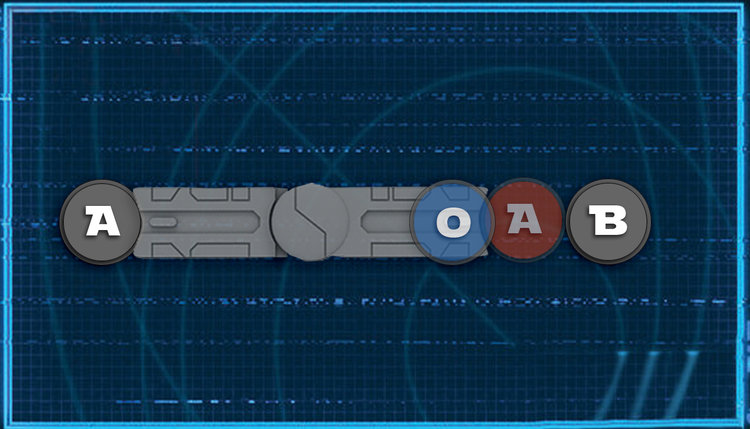 Model Blocking: Model blocking is by far the easiest to set up because every part of the required items are under your control and you don’t need to be on a specific mission objective for the required components – but Model Blocking is also the least powerful because the threat model can elect to enter melee with the blocking model instead of the target model. Using the clause under Melee “You cannot move a unit such that it would be in base contact with multiple enemy units–effectively starting a melee” we can set up situations where the opponent cannot land in melee with the target without also landing in melee with the blocking unit making that an invalid landing zone and the threat model will have to select a different landing zone. 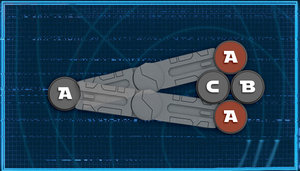 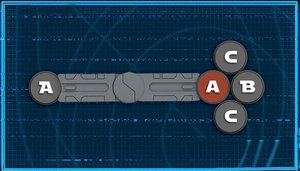 Distance Blocking: Although distance isn’t exactly blocking, it is still an easily accessible and often more reliable strategy of denying melee than the above examples of blocking, and so it should be brought up here as well.

The keys to distance blocking is knowing your ranged and speeds and how they relate to each other. The most important example to know is that a small base moving speed two is millimeters short of a range one distance. that means that if you move a model so that it is touching one end of a range 1 widget and the other end of the range 1 widget is touching the other model in question, then that model can’t end in melee with you after 1 speed 2 move. When playing things that are counting on margins this narrow it is important to premeasure and get acknowledgement from your opponent – saying something like “my intent is to be exactly at range one so that you can’t move to engage me, do you agree this is exactly at range one?” is a great habit to get into when playing competitively and helps make situations like this clear and easy to manage.

With these 6 new tools in your kit, you should have a much stronger control over the pace of when and how melee happens in your games of Star Wars: Legion. In addition, although all of these tactics above are useful in preventing a melee scenario, some of them are also useful in preventing an opponent from reaching an objective point or any location you don’t want them to reach in general – especially vehicle blocking. As with all new tactics you learn, keep an open mind on how to apply them while playing and use them in ways that make sense to your playstyle – understanding and applying in your own way is always more valuable than copying.

Good luck and may the force be with you.

Very excited to be sending out my first commissioned piece today to a fan of my (retired) blog. Bossk is a really fun mini to paint! #starwars #starwarslegion #miniatures
Big paint day ahead!
An article I wrote about being a total Legion beginner is up on the official FFG website. Give it a look!
New minis going up in the store today 👀 #miniatures #dnd #dungeonsanddragons #dungeonsanddragonsart #minis #rpg #fantasy