Han Solo is a reluctant and unconventional hero. But maybe that is exactly what makes him so successful. In Star Wars: Legion Han Solo is the Rebels third commander and he brings new and interesting tricks to the Rebellion’s arsenal.

Han Solo is first and foremost a control piece. On the surface may seem like a gun-slinging damage-dealing badass – and he may be that too, but there is so much more to him. Through the use of his command cards, upgrades, and friends you can make Han one of the most frustrating (in a good way) models the opponent can play against.

Han Solo has multiple abilities and command cards that add up to make him a frustrating piece for your opponent to deal with. Although Han has the same ranged weapon as Luke, he gets to fire it twice and with sharpshooter he ignores a significant portion of his targets cover – he is going to kill 3 to 4 troopers a round meaning that although his damage output is slightly below average, it is incredibly reliable. Han only has a white die for defense, but despite that is one of the hardest models to kill. Using the Duck and Cover upgrade that comes with Han in conjunction with his Low Profile ability he will have heavy cover even out in the open, add in Esteemed Leader and Han can almost guarantee that he will never receive more than 3 wounds at a time – which works nicely with his Uncanny Luck ability raising his white die percentage to higher than a red die’s chance of succeeding. When judging a commander’s efficiency we also have to take into account that we are spending points on their command cards and their courage bubble which increase the entire armies efficiency in a way that is not immediately obvious just by looking at their statistics and adds significantly to their points cost. 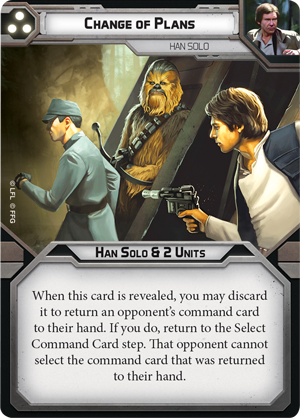 Han has a Leader upgrade, a Training upgrad, and a Gear upgrade slot which gives him a pretty diverse bunch of options to equip. In general though it is best to focus on defensive upgrades for Han to keep him around long enough to be a giant thorn in your opponent’s side.

Han comes with Improvised Orders which is a great upgrade and fits Hans overall play style very well, however it is often better to take Esteemed Leader from Leia and put it on Han to increase his durability significantly. If you are playing with Leia as well she has two Leader upgrade slots can take Improvised Orders so that you are still keeping the best of both worlds. Using Esteemed Leader Han can almost guarantee that he never receives more than 3 wounds which allows him to use his uncanny luck on every wound that comes through.

For Hans Training upgrade Duck and Cover which comes with him is a very strong choice, allowing Han to receive heavy cover even when out in the open and really limit the amount of damage that comes through on him.

As for Han’s Gear upgrade slot you can equip it as you see fit or even leave it blank, however take a second to consider Environmental Gear on Han as he will be wanting to spend time in and around cover which can slow his movement. Emergency Stims which comes with him is also a strong option which can give him one last activation if he takes too many shots for the team.

Han is a damage dealing gun slinger and an impressive control piece in many ways – the most base level and straight forward way to play him is to move him up to an objective and park him there to defend off the opponents troops with his deadly accurate pistol… however depending on your style, list, and objective you can play him slightly more or less agressively.

Playing Han as an offensive gun slinger can be as simple or as subtle as you’d like it to be, however it is important to remember that although he is dealing very consistent damage, he isn’t dealing a lot of it so there may be other units better suited to this role. His primary target should be troop units, and ideally two at a time. Han is also putting out two suppression a turn when in an aggressive position which leads nicely into an all around style of Rebel Control list where you are using other offensive units to split fire and put out as much suppression as you can to limit enemy activations while using Han’s command cards to control the pacing of the battle.

When playing Han as a more defensive piece your tactics dont change very much, but the units you send with him may. When playing Han in this style you actually want the enemy to focus on and attack Han which may seem counter intuitive, but in doing so you are wasting a large amount of your opponents potential output for a round – especially when using Reckless Diversion and giving them limited choice. Any unit with Guardian (especially Chewie) is a good accompaniment for a defensive Han build. When playing Han defensively or as bait for the rest of your army it is critical to take the defensive upgrades on him.

Either way you play Han there are some key things to keep in mind – Han might be one of the toughest models to damage at range, but if he ever gets caught in melee he is guaranteed to die. Not only does a large amount of the defensive tech Han is counting on only work at range, but also being in melee prevents other abilities he may be counting on like  Reckless Diversion. It is also important to keep in mind that weapons that reliably generate critical hits or have pierce also a strong chance of ending Han early by bypassing defenses he was counting on like Guardian and Uncanny Luck. For this reason it is very important when playing Han to keep distances from Han to enemies in mind and what weapon effects they have. A clever opponent will focus on Han with pierce weapons or forgo an attack to double move and engage Han.

Han can be incredibly frustrating to play against – he is difficult to kill, he is consistently killing your own troops, and worst of all he is interfering with all of your plans.

As far as Han dealing damage to you goes, this is the least of your worries. Han does a rather small amount of damage in a small area and in a predictable way. If you have troops close to him and out in the open he will mow them down easily and in bunches, but if your units are behind heavy cover and with a dodge token he will need crits to deal any damage at all.

Han being difficult to kill is also something that is within your control to manage. Han can shrug off almost all attacks at range, especially if he has friends around to be his Guardian. However Han crumples in melee, losing many of his abilities and having very limited capacity to fight back. One of the most effective ways to defeat him is simply to rush into melee as fast as you can to trap him in place. It is almost always best to double move into engagement with him and attack the next turn than to take a ranged attack or other action and risk him having a chance to escape or retaliate.

Your last problem when dealing with Han is his disruption of your plans. This one is hard, you and your opponent will be constantly reading each other and doing mental gymnastics trying to figure out when what is going to happen. If you aren’t able to accurately read and predict your opponent then its a coin flip as to whether or not they will do what you think they will – in this case the best course of action it to take the optimal command card and do your best to plan a contingency for what to do if they do play the counter to your plan.

If you have an end run on Han and you fear he may play Sorry About the Mess to get out of the stick situation before you can seal the deal – think of other ways you can put pressure on him, or other options you might have with your threatening piece after Han has moved out of range so you dont waste your activations.

If Han plays Reckless Diversion there is often little your troops can do to avoid attacking him, unless you are able to get a unit into melee engagement with him – if you can you absolutely should, even if you wont get an attack after moving. Entering into melee with him locks him in and makes him un-targetable to ranged attacks, freeing the rest of your list to act as they’d like. If you are unable to engage him then you are more or less stuck attacking him, so you might as well take your best shot to end him – fish for criticals and use your weapons with pierce on him.

If you have a perfect command card and worry that Han may play Change of Plans on you, it is almost always a bad idea to try and second guess them and play a suboptimal card hoping you can change into the one you actually want. It is much better to play the card you want and have a backup plan if it gets changed. The chance they are playing Change of Plans is one in seven anyways, the odds are in your favor that your plan will go through five out of six turns – just go with your plans.