Death Troopers are an elite variant of the Stormtroopers who are part of Imperial Intelligence. They serve as protective details and bodyguards for important Imperial officers and members of the Tarkin Initiative, as well as being used as special-mission experts and specialized commandos. In Star Wars: Legion Death Troopers ar the fourth Special Forces choice for the empire and represent an elite strike force and shock troopers. 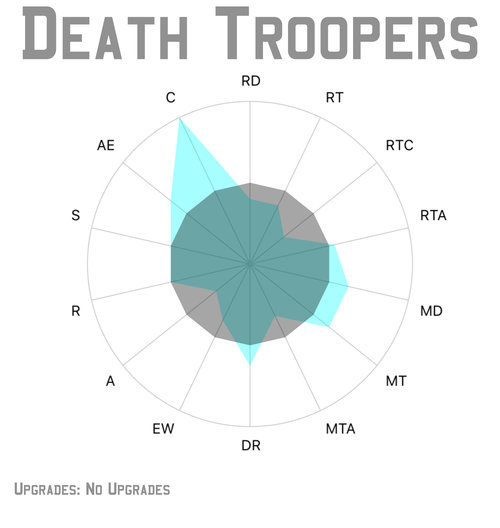 Death Troopers are elite skirmishing unit similar to the Scout Troopers. They are also able to hold a zone or flank on their own with minimal to no support and can handle any job given to them. However, unlike the Scouts, the Death Troopers want to focus on the psychological aspect of the fight and to hold a zone or objective rather than sneak around continually advancing.

Death Troopers have a lot of moving pieces to look at, both in the upgrades they want to take and the way in which they want to be played – but we will look at upgrades in the next section. The base unit of Death Troopers has three weapons available to them all of which put out less than average damage for their points, however if we take into account their Precise 2 keyword we see that the Death Troopers deal exactly average damage with any weapon after accounting for aim. This means that the Death Troopers are equally good at all ranges as long as they are played carefully and deliberately. Despite their high damage resistance their low attrition value indicates they want to be played as a cautious even defensive unit. They are likely to shrug off most hits, however any missed defense rolls or weapons with pierce mean a dead soldier and significantly reduced effectiveness for your Death Troopers. This gives us a suggested playstyle for Death Troopers in which they want to move into a position they will not want to move from where they can aim and attack units with limited risk of recourse. This seems like a similar style to an average Stormtrooper gunline though so why pay the premium to take Death Troopers over Stormtroopers? The increased damage reduction and more consistent damage output at range makes them more consistent and a more impactful and dense activation which can be an advantage when frontloading your turn to get ahead of attrition or scenario. 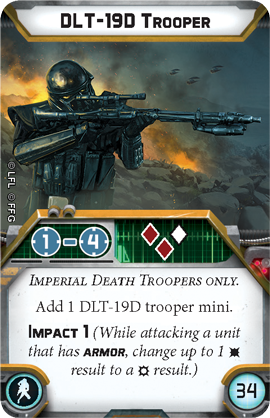 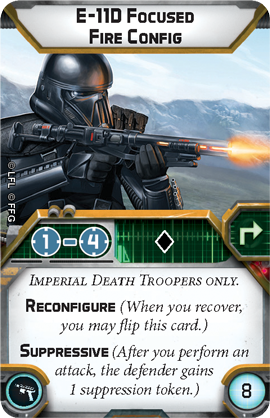 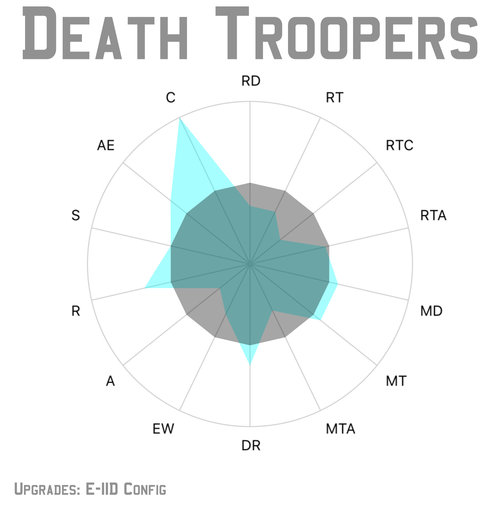 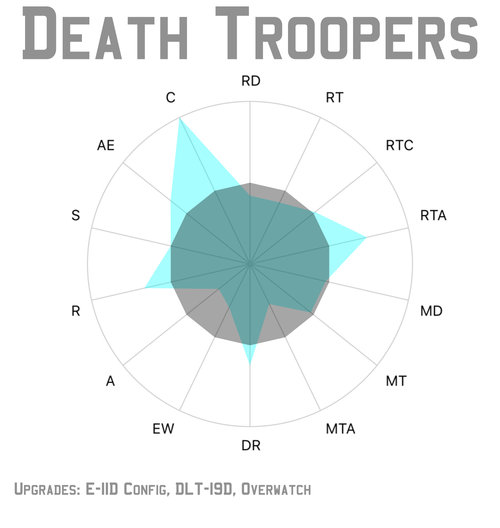 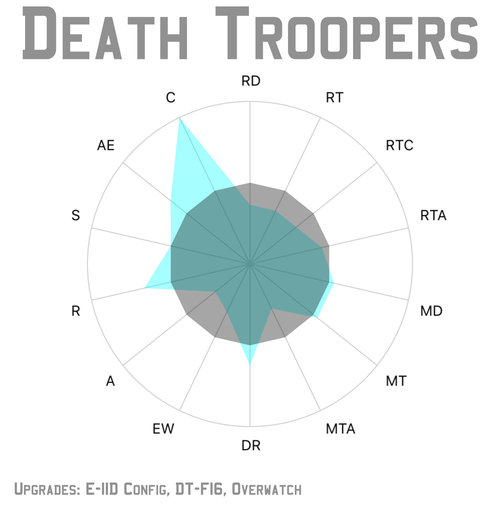 The Death Troopers have upgrade slots for a Special Weapon, Arsenal, Training, Comm, Gear, and Grenade upgrade card. This makes them one of the most customizable units to date. However they are already struggling to keep their balance on the edge of efficiency, so every upgrade they take must have a purpose or they quickly become inefficient.

As discussed in the unique upgrade section, you will probably want to take the Arsenal and the Special Weapon upgrades depending on what your intended use is for the Death Troopers. The Death Troopers can also skip the grenade slot as none of the existing grenades improve their damage output beyond what their Arsenal Upgrade can do and it is also at a shorter distance.

Putting HQ Uplink in the Comms Slot could be very valuable to the Death Troopers because their arsenal weapon exhausts so it will maximize their recover actions and order control. It also allows them to operate out of command range, give themselves an order, and then interact with the objective before other units. However it does reduce their efficiency quite a bit and should be considered carefully when upgrading them.

The Gear Slot is also a valuable upgrade slot for them to increase their damage resistance and attrition value. Emergency Stims can give two DT’s an extra turn to act, and your medics an extra turn to get into position to revive the fallen troopers.

The Training Upgrade is the place the Death Troopers will find the most value. Duck and Cover is quite strong at increasing their survivability – gaining light cover and denying a point of damage can be a big advantage in their attrition. Hunter can also increase their damage output significantly when using their white dice weapons – 4 rerolls on white dice that surge to hit increases their damage output by quite a bit and can be quite strong on the right target. Finally, Sentinel which can be used to increase their utility as either a scenario unit or a combat unit by allowing them to trigger standby at longer range and either attack or move to safety more often, combined with their Ready 1 keyword they will be quite efficient with their aima and standby tokens.

Death Troopers are quite a versatile unit, but you will find that they are slightly better at defense than offense and thus should be used in a capacity that takes advantage of that. Because their damage output is relatively low and they quite expensive it is best to be mindful of how many you will take and how you will use them, it’s usually best to include only one maybe two units of the Death Troopers in a list.

There are two main ways to play Death Troopers on the table, but they are somewhat similar and both rely off the same mechanics, just using them in different ways.

The first way to play the Death Troopers is the Take and Hold Death Troopers. These DT will make their way into position (ideally near an objective) and deny enemy access – this will give you an edge in scenario presence and board control. This could be taking and holding a contested objective, like the center point of Recover the Supplies or Key Positions. In this style of play the DT will want to be fairly well equipped and focused on defensive upgrades like Sentinel and Emergency Stims to keep them in the game long enough to see the mission through, while HQ uplink will allow them to focus on a recover / standby play style that will make the most use of their keywords… and they WILL want to be making use of standby and recover to make the most use of their key words since you are paying for them and their efficiency hinges on it.

The other way to play the Death Troopers is the Strike Death Troopers. Unlike the Take and Hold Death Troopers, the Strike DTs will make their way with the bulk of your army and then continue past to engage the enemy and slow them from advancing. This style they will not be focused on the objective, but rather focused purely on being a thorn in your opponent’s side. Keep them in cover in a position where the opponent can’t ignore them and draw their attention. This version of Death Troopers will be Similarly upgraded to ensure they last in their position. Although they ARE going to die, you want to ensure that they last for at least two rounds. The goal is to be enough of a pest that the rest of your forces can get into position and get the upper hand in scenario. These Death Troopers will want more well rounded upgrades, although Overwatch is still excellent on them, you will also want to consider Hunter. the Arsenal, Special Weapon, and Emergency Stims are essential upgrades in this play style. The extra health from Emergency Stims and the extra body are essential to keeping the unit around long enough to slow down the enemy forces.

Keep in mind that with both these styles of play, the Death Troopers are going to be a main focus of the enemy and unlikely to last the whole game – but that should be accounted for in your plan. Their point is to be an early game damage magnet giving you an advantage you can push later into the game.

Also keep in mind that in both play styles you will likely want to equip the DT with the E-11D, the DLT-19D, Overwatch, and possibly Emergency Stims. This will make them approximately 130 points, or almost as much as two Stormtrooper units with DLT. The Stormtroopers will do approximately 3.5 damage each for a total of 7 while the DT will do 4.625 as a unit. The Stormtroopers also have 10 health with a 50% save while the DT will have 5 health with a 66.8% save. This makes 2 units of Stormtroopers the optimal choice in nearly every circumstance. However a unit of DT have an advantage of range and flexibility over the Stormtroopers that can be leveraged into a game advantage. Specifically being able to engage from much farther away, and being able to optimally use standby against most units. Making DT a more complicated unit to use than the equivalent number of Stormtroopers but if played well, well worth their cost.

Death Troopers were designed to stick around and be a thorn in your side. They are well equipped to resist damage and to engage most units from longer distances than they can retaliate from. However their defenses are rooted almost entirely in their defense diece. If you target them with a high value weapons with pierce you will eliminate them fairly quickly. Especially Strike Team snipers whos efficiency skyrockets when targeting Death Troopers. Lightsabers, Force Lightning, Boba Fett, and Chewie are all also great ways to remove them.

Another great way to deal with them is volume of low quality dice. Because the Death Troopers have their longevity tied up in their defense dice they can fall under the weight of buckets of dice and statistics. Units like Fleet Troopers or Z6 therefor are also great at taking down DT.

However you decide to remove them from the battle is fine, but they should be high on your list of priority targets. You must deal with them, otherwise the Death Troopers will give your opponent leverage over the scenario and pace of the game that you can’t afford to give up without a fight.